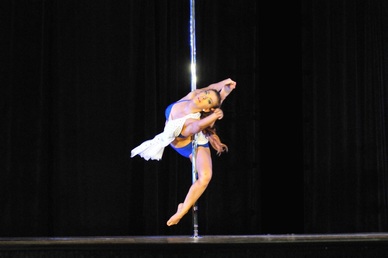 Kathryn Lauvstad grew up in The Pas Manitoba, where she began figure skating and then made the move to coaching.  She moved to Winnipeg to pursue a science degree where she continued coaching and teaching "learn to skate".

She became a student of Tara Meyer's in the spring of 2013, started taking pole fitness classes and quickly fell in love with the sport and competing.

In 2014 she placed first at the Vertical Love competition in the Championship level 2 division and represented Manitoba at the 2014 Canadian Pole Fitness Championships as an amateur, and then in  2015 she won a distinguished performer award in the semi pro category at the North American Pole Dance Championships.